Over Two Centuries of Water Service

In the late 1800s, the Palmdale Water Company dug the first irrigation ditch to divert water from Little Rock Creek. The ditch was 6-1/2 miles long, 6 feet deep, and 8 feet wide. However, it soon became apparent that water storage facilities were needed, so the South Antelope Valley Irrigation Company was formed in 1895 to construct Palmdale Dam creating Lake Palmdale. To bring water to Lake Palmdale, a wooden trestle and flume were built and an 8.6-mile earthen ditch, known as Palmdale Ditch, was dug parallel to the ditch by the Palmdale Water Company.

By the early 1900s, the Palmdale Water Company and the Littlerock Creek Irrigation District had acquired the facilities of earlier water companies. They began studying options and costs for constructing one or more dams on Little Rock Creek. They determined that a public irrigation district would be the best way to finance this construction, and the Palmdale Irrigation District was formed in 1918 by the public’s vote.

The Palmdale Irrigation District was formed under Division 11 of the Water Code of the state of California to supply irrigation water to the approximately 4,500 acres of agricultural land within its boundaries. Under this code, the District’s primary functions were, and continue to be, to acquire, control, conserve, store, and distribute water for the beneficial use of inhabitants and water users within the District.

The construction of Littlerock Dam and Reservoir was completed in 1924 with a water storage capacity of 4,200-acre feet. It was noted as the highest reinforced concrete, multiple arch dam in the world. However, a great deal of controversy surrounded the design of the Littlerock Dam, and by 1932, the state declared Littlerock Dam an unsafe structure and ordered renovations to be made.

By 1940, with sediment continuing to collect in Littlerock Reservoir, the State Division of Safety of Dam further reduced storage capacity in the reservoir, citing seismic safety concerns. Standby water wells were developed to help with water supplies.

The local aerospace industry emerged at Air Force Plant 42 in the 1950s, and the shift from supplying agricultural water to supplying domestic water began. 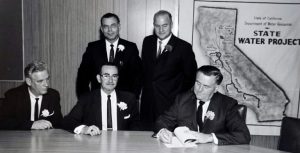 By 1966, the District was providing only municipal and industrial water. The name was changed to Palmdale Water District (PWD) in 1973 to reflect this new direction. However, from 1965 through 1985, the controversy over the seismic safety of Littlerock Dam continued, and water demands greatly increased.

Plans were started to rehabilitate Littlerock Dam to provide seismic safety, increase water storage capacity, and renovate the recreation area. This rehabilitation was completed in 1995 and included raising the spillway height by 12 feet, nearly doubling the reservoir’s capacity. The historic wooden trestle and flume, which had been used and repaired over the years to transport water, were also replaced at this time with a 48-inch diameter underground ductile iron pipe. The United States Forest Service maintains the recreation area at Littlerock Dam and Reservoir, and the District controls the level of the reservoir and the operation of the dam itself.

The District’s boundaries now encompass approximately 187 square miles of land in northeastern Los Angeles County, consisting of more than 30 non-contiguous areas scattered throughout the Antelope Valley. The District’s primary service area is within the city of Palmdale’s planning area. The distribution system has over 403 miles of pipeline ranging from 4 inches to 48 inches in diameter, 24 active water wells, 14 booster pumping stations, and 20 water tanks, with a total storage capacity of 50 million gallons of water.

Because of increasing power costs to operate these facilities, along with the possibility of power outages, the District developed alternatives for providing our own electrical generation using wind and sun resources. A wind turbine generator was installed at Lake Palmdale to provide a large majority of the power needed to operate the water treatment plant, and a solar array system was installed at the District’s shop facilities to offset power costs. The District also works closely with electricity and natural gas providers to ensure energy efficiency and the best possible rates. 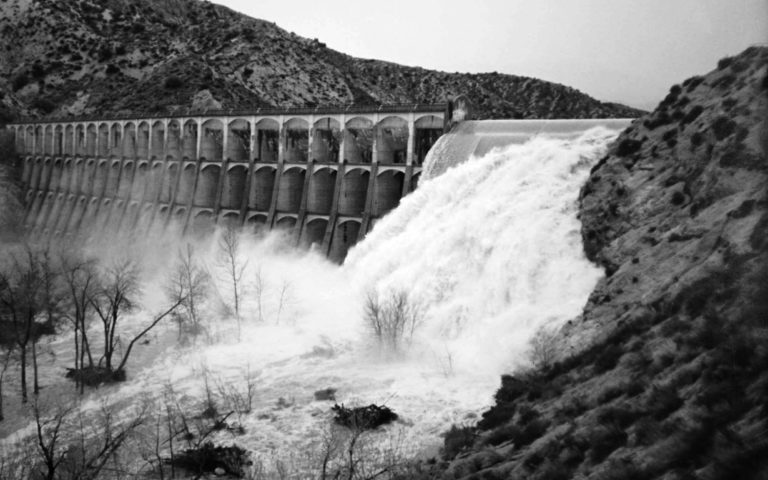 The year 2009 marked the completion of another expansion to the water treatment plant to allow up 35 million gallons of water per day to be processed using state-of-the-art disinfection methods. Sediment was removed from Littlerock Dam and Reservoir to increase its storage capacity. In addition, water mains from the 1950s were replaced through available grant funding.

The District’s service area population is expected to more than double over the next 25 years, which will cause water demands also to increase. A Strategic Water Resources Plan has been developed to address these demands and identifies several water resource options available to meet these needs, including the use of imported water from the State Water Project, groundwater, local runoff, recycled water, conservation, and water banking, and considers and evaluates these options with respect to cost, reliability, flexibility and sustainability.